This page took too long to load. Please try refreshing or going back to the previous page. 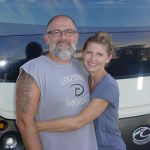 I would Most Definitely recommend MHS. The people and low pressure sales approach was what I liked best.

American Coach RV builds only class A diesel pusher motor homes. As of 2016, all new American Coaches are built on Freightliner chassis. You will find a host a different chassis amenities available such as I.F.S., and tag axle models.

Motor Home Specialist is proud to have sold countless American Coach used RVs through the years and could not be more excited about offering this iconic brand of motor coach now in new RVs as well. We have found the American Tradition motor home, American Dream, American Eagle RV and the American Heritage to all be a quality used luxury diesel RVs that have stood the test of time and looking forward to bringing new American Coach buyers into the Motor Home Specialist family. To find out more about the incredible motor coaches and the exceptional and upfront pricing that has made MHSRV the industry leader please feel free to call one of our sales representatives today.

Manufacturers options, features, colors, etc. can all change without notice and MHSRV assumes no responsibility for the changes or possible errors in information provided by the manufacturer. All weights and measurements are approximate and not guaranteed to be 100% accurate. For the latest information be sure to check with your salesman and or the coach manufacturer and verify before purchase.